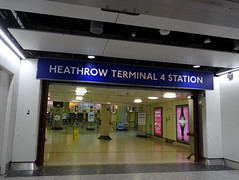 Zone 6 Tube and rail station located inside Heathrow Airport. Note that travel between the various Heathrow stations is free of charge.

It's on the Piccadilly Line, but not all trains call here; the service splits just after Hatton Cross, with some trains (indicated "to Heathrow Terminal 5") continuing on through Terminals 1/2/3 to Terminal 5, and others (indicated "to Heathrow Terminals 1, 2, and 3") going to Terminal 4 then looping round to Terminals 1/2/3 and then returning to Central London (see this diagram on Wikipedia). Passengers for Terminal 4 should either take a train indicated to Terminals 1/2/3 in the first place, or change at Hatton Cross. (Note that at least as of early 2008, announcements on the train suggest changing at Hounslow West; this is also a perfectly acceptable place to change, but Hatton Cross is closer to the airport, and there are buses from there to the airport in the case of service failure.)