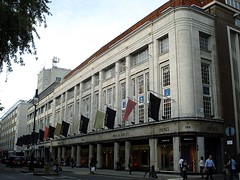 The flagship outlet of the doyen of homeware stores, located on Tottenham Court Road. It has branches in Chelsea and Kingston, as well as a small number of other British cities. It shares its building with a branch of Habitat (which now owns Heal's).

Even amongst the competition of furniture and homeware retailers on Tottenham Court Road, Heal's stands out as not only the most venerable (it was founded in 1810, and moved to its present location 30 years later) but also the most reliable. Their design aesthetic tends away from the trendiness of some of their smaller boutique competitors, but strongly stresses classic design motifs without being archaic or out-of-touch. Its furniture, in particular, tends to be of very high quality, and doesn't age badly, though there is a premium on this, and some of the items can be quite expensive.

However, there are extensive departments devoted to kitchen and bathroom wares, as well as linen, curtains, and other furnishings. There is a bespoke curtains department on the first floor, a large selection of carpets, as well as a wedding list service (a standard feature of many large department stores).

On the ground floor are the kitchen and bathroom products, shelving, picture frames and other decorations, which again stress quality, but at a slightly more affordable price than the furniture. The long thin room at the front of the store, into which the entrance opens, showcases a seasonal theme range.

There is a cafe called Meals (or "Meal's", according to the website). In addition, the foyer of the building (between Habitat and Heal's) contains an outlet of the quality cake and sandwich shop, Peyton & Byrne.