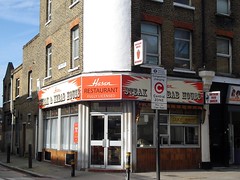 Hassan Bros was a steak and kebab restaurant on Tower Bridge Road in Bermondsey. It has now closed. According to a thread on the London SE1 forum, as of May 2018 the premises are due to become a burger place called Rossi's.

Steak and kebab restaurant on Tower Bridge Road in Bermondsey.

bob visited on a Tuesday lunchtime in March 2011. I had a lamb shish kebab (£5.60) photo, which was fine although the meat was a bit tough. The chips and salad (included in the price) were fine. The chilli sauce was a bit mild to my tastes. A bottle of water was 75p.