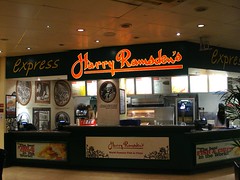 Harry Ramsden's Express was a fish and chip kiosk in the food court inside Euston Station. It has now closed. As of February 2016 the food court space where it used to be is boarded off as part of the redevelopment of the station.

Fish and chip kiosk in the food court inside Euston Station. It's branded as a branch of Harry Ramsden's (a northern fish and chip restaurant chain) but is actually a franchise run by Select Service Partner.

They advertise a number of set meals, as well as a small fish-only list and some other things like chicken nuggets and fish bites that may seem more fast food and less chip shop. The prices of things like chips, sides, drinks, etc are not listed separately, so it appears that they expect you to order by meal number, chicken shop style. They have salt and malt vinegar at the counter but not onion vinegar. According to a couple of posters seen in March 2012, they sell cooked breakfasts too (though there was no indication of the times of this, and the price of the coffee that came with it seemed misleading), as well as Stella (£2.36/pint, £0.66/half-pint as of March 2012, possibly only available with a meal).

secretlondon visited on a Friday evening in March 2012. I chose meal number 1: large fish, regular chips, and a drink for £6.49. The server entered the wrong meal — a chicken burger meal for £5. I caught it but had to tell her three times which drink I wanted. I was given the food on a plastic tray which took two hands to carry, and I struggled to move my dinner and my suitcase to a spare table in the food court.

My meal consisted of a regular size fast food style soft drink and a paper tray with one piece of fish on a bed of chips photo. The fish was not that large and the portion of chips was tiny. The chips were also not very good. The fish was OK, but I felt cheated.

secretlondon's verdict: I used to live reasonably near the founding restaurant in Guiseley near Leeds, which had a good reputation. London fish and chips have a poor reputation, so I'd hoped this would be good. However, I don't recommend it.