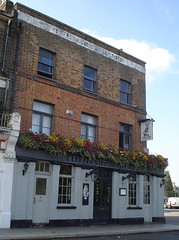 Inside, the low-ceilinged space is broken up with square pillars. The floor is dark-stained floorboards, and tables and chairs are varnished wood. The white-tiled bar back is covered with writing in Sharpie, advertising the spirit bottles and bar menu photo.

Kake visited on a Wednesday lunchtime in September 2014. There was one other customer at 12:15pm, and another four arrived a little later. Music was playing, a little too loud to ignore, but not loud enough to impede conversation.

According to their website as of September 2014, food is served noon-3pm and 6pm-10pm Mon-Fri, noon-4pm and 6pm-10pm Sat, and noon-8pm Sun photo of menu in the same month.

Kake tried the imam bayildi with cucumber yoghurt and couscous (£11) photo. It wasn't in fact imam bayildi (a dish of whole aubergine(s) stuffed with tomatoes and onions), but it was a decent enough stew of aubergines, peppers, tomatoes, and onions. The yoghurt was low-fat and rather sharp, which in combination with the sharpness of the tomatoes wasn't ideal. The couscous was done well, though, not stodgy or overcooked.

According to a sign seen in September 2014, there's a quiz every Monday from 8pm except Bank Holidays.

Accessibility: A small step to get in, no more than an inch or so. Some of the seating is on a dais, and some is high stools, but there's a reasonable amount of normal height seating on the level. Toilets are up a flight of stairs with bends and handrail on one side all the way up, then two more steps with no handrail.