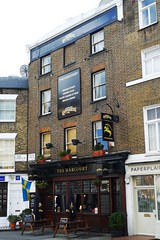 The Harcourt was a Swedish-themed pub in Marylebone. It has now closed. According to the Harcourt website, it closed in November 2014 but the people behind it have moved to the Duke of York at 45 Harrowby Street, W1H 5HT.

A Swedish-themed pub near Edgware Road Station, in Marylebone. Previously known as the Harcourt Arms photo.

For the most part this is a decent, above-average pub in an area with an abundance of them, but the Harcourt distinguishes itself by its Swedish touches, which aren't overpowering but presumably owe to the close proximity of a Swedish church and embassy. A few Swedish dishes find their way on to the menu, and key fixtures in Swedish sports get shown. They also advertise the availability of "snus" (snuff) on signs dotted around the place.

Seating takes the form of tables around the front of the bar, as well as a couple out the front. There's a good sized beer garden down some narrow steps to the rear of the pub, with canopies and plenty of hanging plants and flowers, though on our Sunday visit, despite the rest of the pub being empty, the garden was full with people enjoying an outdoor barbecue (possibly a function). There's also an attractive little side room, painted all yellow and able to hold around five or six people, called the "Svenska Salongen". Upstairs is advertised a bookable lounge with its own bar.

Even without the Swedish influences, this is still a decent pub, though. There are two handpulls for ale at the bar, and despite the prominent signage (and branded hanging lamp) outside, there's no Adnam's available on a June 2009 visit -- only London Pride and Marston's Pedigree, though these presumably change regularly. Premium lagers are also available on draught, such as Leffe, Hoegaarden, Staropramen, Beck's Vier and Lowenbrau, alongside the usual suspects. The fridge behind the bar is predictably well-stocked with various flavours of Kopparberg cider.

Food is served noon-3pm and 6pm-9pm Monday to Friday and covers a range of pub basics, as well as a few Swedish dishes.