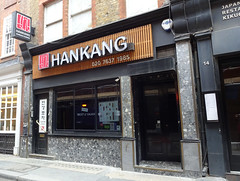 Small Korean restaurant on a side street off the Oxford Street end of Tottenham Court Road. It's next door to Kikuchi.

The ground floor seats about 24 people at tables for 2-6, each with a built-in grill for Korean barbecue. The tabletops are dark wood effect melamine, and the chairs and banquette seating are black leatherette, echoing the matte black of the floor tiles. The tables are fixed to the floor, probably because of the grills, but there's plenty of space between the tables and banquettes. According to the interweb, there's also a karaoke room in the basement and another dining space on the first floor.

Kake visited on a Monday late lunchtime in July 2009. There were only a couple of other customers in when I arrived a little after 2pm. Service was friendly and efficient. They had no problem bringing me tap water, which arrived with ice in what looked like a teacup. Piped piano music was playing.

As well as a la carte, they also have a cheaper lunch menu photo, which on my visit had dishes ranging from £7 to £8.50 including rice/noodles, soup, namul (vegetable side dishes), and a piece of fruit (watermelon on my visit) to finish.

From the lunch menu, I chose the jab tang-bab (rice with mixed seafood and vegetables, £7.90) photo, which turned out to comprise squid, prawns, whelks, and a single large mussel still in its shell, all served in a mild orange-coloured sauce with thinly-shaved carrots, chopped red peppers, and some kind of black fungus mushroom. The squid was nicely-judged, neither undercooked nor overcooked. The prawns were very small and quite thoroughly cooked, but this worked fine in context. The whelks were a bit chewy and bland, but then they usually are.

The namul were generously-portioned; I got one dish of not-very-hot kimchi and another of what seemed to be slightly fermented sliced cucumber. The rice was good, and clearly not an afterthought. The clear soup that came on the side tasted a little MSG-y, but the small tofu cubes floating in it were good quality tofu, and I also liked the crisp beansprouts with the beans still attached.

Overall, this was a very decent price for a reasonable quantity of good food in such a tourist trap area. The evening menu seems less good value, but could be worth checking out anyway.

Accessibility: One step up to get in. The toilets are in the basement, down a flight of stairs with a bend at the end and a non-continuous handrail on one side.