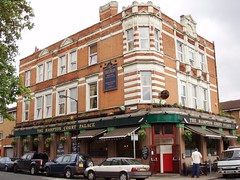 The Hampton Court Palace was a pub and hotel near Elephant & Castle. By mid-2014 the pub part had been closed and converted into a hotel bar for hotel guests only.

bob visited on a Saturday afternoon in June 2009. There were about 10 other customers, several of them obviously locals. Sky Sports news was on the big screen.

Harvey's Sussex Best (£1.50 a half) and Hobgoblin were on handpull. The Sussex was okay but a touch warm, though this may have been because of the weather in general.