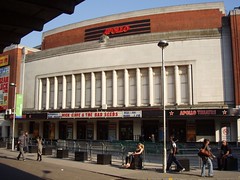 A large venue in Hammersmith. The Apollo is a Grade II listed building, originally opened in 1932 as the "Gaumont Palace" (and later taking the name "Hammersmith Odeon"). Its official name is currently "Carling Apollo Hammersmith".

Primarily, this large venue (one of the few of its size in London) puts on music gigs for major acts who do not wish to play the larger soulless arenas. As a former cinema (like the Brixton Academy), the floor slopes down towards the stage area. This means that people standing in all parts of the stalls can usually get a good view of the stage area (although for some events seats are installed). There is a separate balcony area with fixed seating.