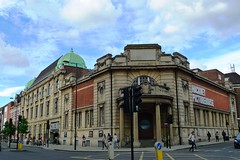 A cinema in Hackney opposite the Town Hall, opened on 28 October 2011. The building was formerly known as the Ocean photo, an arts and music venue.

The cinema itself has its box office inside the main entrance from Mare Street, and the cinemas are upstairs. The seats inside the screens are comfortable and the seat backs recline slightly when you sit in them. On the evidence of Cinema 1, the screens are very large, running across the entire front of the room.

Attached to the cinema is a large cafe/bar area stretching along the ground floor fronting Mare Street. It opens 10:30am for pastries and coffee during the week and serves lunch from noon Monday to Friday and dinner from 5pm-10pm every day, as well as brunch from 10am-4pm on Saturday and Sunday. Ewan visited on a Sunday and had a burger with cheese (£9.50) photo, which came within 15-20 minutes as promised (I was on a tight schedule waiting for a film to start) and was a good burger, slightly pinkish meat inside the burger, served on a brioche bun with a bit of coleslaw on the side as well as plenty of good crispy chips.

The bar has some keg draught taps, nothing very interesting, though it also stocks local bottled beers in the fridge, including Beavertown and London Fields. Ewan had a Beavertown Rye IPA (£3.50) which was very nice.

Clearly the cafe/bar gets customers who are not visiting the cinema, and seems to be favoured by families.