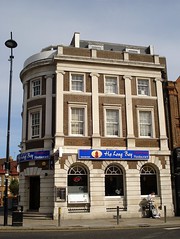 Despite the paper tablecloths, the decor is quite smart, with clean yellow-painted walls, tall narrow-backed brown pleather chairs, and bamboo lanterns hanging from the ceiling (supplemented by an abundance of spotlight-style lighting). It's quite large, seating well over 60 people, with some of the tables big enough to seat eight.

Kake visited on a Monday lunchtime in September 2009. There was plenty of room available, as there were only four or five other customers; I was invited to choose my own table, and decided to sit by one of the many high-arched windows looking out onto the street.

I went for the pho tai (noodle soup with rare beef, £6) photo. It wasn't bad. The flavour of the broth was a little thin, and I'd have preferred more depth of flavour, but at least they hadn't tried to mask this by oversalting it. Noodles were fine, and the accompanying garnishes were up to scratch; I've seen fresher beansprouts, but these certainly weren't going off by any means. The beef was disappointing, though, cut somewhat raggedly and not actually rare as it should have been.

I also had a glass of soya milk (£1.20), which tasted fresh, with a pleasing nutty flavour. Tap water was provided swiftly, though without any ice. Service was very friendly and helpful.

Prior to a change of management in October 2008, this place was known as Saigon Top Chef; a staff member told me that the menu options stayed roughly the same, though, and indeed on my visit nearly a year later the menus all still had the old name printed on them.

Accessibility: Three or four steps up to get in, and another three steps down to get to the toilets.