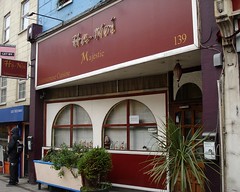 Ha-Noi was a Vietnamese restaurant near Lambeth North Station. It has now closed, and as of February 2013 there's a to let sign outside. As of January 2014 the Ha Noi signage is still up photo.

Despite having the name "Ha-Noi Cafe", this is a Vietnamese restaurant near Lambeth North Station.

secretlondon visited on a Tuesday in November 2008. I had Vietnamese fish cake, hot and spicy lamb, egg fried rice, Vietnamese beer (£3), and banana fritters and (nice) ice cream (£2.90). Including service it came to £25. This may be a more Chinese-ified type of Vietnamese food; many of the dishes seemed Chinese and they only had two types of pho. The menu had a lot of seafood, including monkfish and seabass.

There was quiet instrumental music and there were candles on each table.

They also takeaway, and they will deliver for a minumum order of £12.

Accessibility: No step, and toilets on same level.