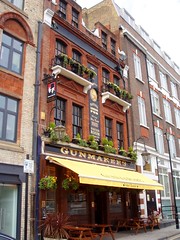 Pub just behind Marylebone High Street, not to be confused with other pubs of the same name elsewhere in London.

Note: According to the Feb/Mar 2018 London Drinker, the Gunmakers closed temporarily in Autumn 2017 for a "lengthy refurbishment". It reopened under new management in October 2019. We haven't visited since the reopening, so some or all of the details below may be out of date.

Having once been a Scottish-themed pub (the William Wallace), the Englishness has perhaps been laid on a little too thickly at times, with portraits of Winston Churchill visible seemingly everywhere you look (and on the pub's hanging sign outside). Additionally, a large display case with ammunition casings complements the pub's new name.

However, on the whole the decor is nicely restrained, with plenty of tables around the pub's single room and wood panelling up most of the walls, which is not too dark in colour so leaves the room still feeling open and airy photo. Additional nice touches include the mints in the bathroom (which also features a Dyson Airblade, for those who like such luxuries). There's a little alcove near the back, where doors to the toilets can be found, with a couple more tables, and there are four more picnic-style tables out the front of this quiet back-street.

On a sunny Tuesday lunchtime visit in June 2009 by Ewan, there were plenty of tables available inside for seating, as most of the people had decamped to the outdoor tables. It would almost certainly get crowded after work, though.

Four handpulls for ale at the bar, but offering nothing particularly exciting: Greene King IPA and Old Speckled Hen, Spitfire, and Bombardier (£1.50/half). Ale was perfectly well-kept though, and draught taps dispense other familiar lagers including Staropramen and Hoegaarden.

Highlights of the menu are chalked up on one wall, but don't appear to change, and not all dishes are always available (as it was quite hot weather, there was no soup). The menu makes much play of sourcing meat from Ginger Pig, and cheese from La Fromagerie, both shops being only a few steps away, which suggests that menu items featuring meat and cheese may be the best choices. Ewan's house salad was nothing particularly special for the price (£5) photo, comprising a pile of fresh green leaves and rocket with chunks of tomato and cucumber and some red onion, along with a wedge of lemon, though condiments including a bottle of olive oil were provided on the side.

Accessibility: The pub is all on one level, with no steps.