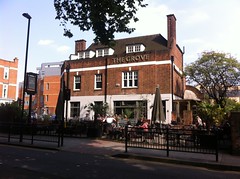 bob visited on a Sunday lunchtime in September 2014. The outside was busy, but inside there were plenty of free tables. A section at the back was laid out for dining but there was ample seating for normal drinking.

The Sambrook's Lavender Hill (£3.75/pint) was actually quite drinkable for a Sambrook's beer. They also had on Windsor and Eton Guardsmen, Greene King IPA, Twickenham Naked Ladies, and Dark Star Espresso Stout.

According to the Grove website as of September 2014, food is served noon-10pm Mon-Sat and noon-9:30pm Sun. bob had the roast beef (£14.50) photo. They asked me if I wanted it pink or cooked all over. The beef came suitably pink and was very nice. I was slightly disappointed by the Yorkshire pudding not being warm but it was good otherwise. The vegetables were nicely cooked.

According to the 2015 Good Beer Guide, there are large heated gardens at the front and side. According to a sign seen in September 2014, there's a quiz every Sunday from 7:30pm.

Accessibility: A step to get in. Next to the door is an emergency exit with a ramp. Level inside and to the toilets. There is a RADAR-locked accessible toilet with baby changing facilities.