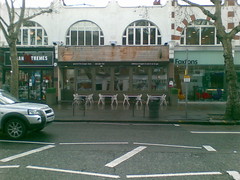 Ground was a posh burger restaurant in Chiswick, but has now closed. As of February 2010, the site is occupied by a branch of Villandry — see ChiswickW4 review.

The information below is retained for people who want to know what it used to be like as Ground.

Posh burger restaurant in Chiswick. It's a similar concept to the Gourmet Burger Kitchen, but differs in that it has full table service. (Another difference is that they don't offer the option of adding extra patties to your burger.)

Although their website says they can seat 110 people over the two floors of their restaurant, only one small section was open on Bob's Monday lunchtime visit in March 2008. There were a few other customers; a couple of family groups plus some suits.

The chorizo burger (£6.85) was fine, though rather too tall to actually eat as a burger; knife and fork were needed photo. Burgers are cooked medium by default - the menu says to ask if you want them cooked differently - but it was a proper medium, still a bit pink in the middle, and Bob was quite happy with it. Extra jalapenos were provided on request at no extra cost, and the sauces on the table include chilli sauce as well as ketchup and mustard.

At the time of writing (March 2008) the dessert selection on the menu on the website is out of date, though the other selections (and the prices) look about right.