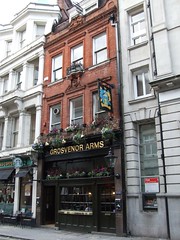 A longstanding Mayfair pub, the company that owns the freehold did not renew the lease and the pub closed as of 16 March 2011.

The narrow facade of this pub conceals a relatively decent place for a drink in Mayfair. Square tables dot the smallish space, with a few larger ones by the front windows. In summer, there are also a couple of small tables just outside on the street. There are stairs to what is presumably an upstairs function room.

The bar offers three handpulls for ale, with regulars being Fuller's London Pride and Timothy Taylor's Landlord, as well as a guest ale of Black Sheep Bitter (£3.20/pint) on an April 2009 visit. Standard lagers include Beck's Vier and Staropramen. Given the area, prices are reasonable.

There didn't appear to be any food offered on Ewan's visit (though an anonymous commenter tells us they do offer food, but only at lunchtimes), but there was a range of bar snacks including large jars of various nuts, sold at competitive prices (50p for a bowl of peanuts, 70p for cashews, £1 for wasabi nuts).

The drawbacks of this pub are no different from any other serving this affluent area (particularly on a Friday after work), but mostly the Grosvenor is fairly sensible, with decent prices. It's probably as good a place to drink as any hereabouts.

According to a commenter (April 2009), there are "Jazz and Magic" nights every other Wednesday, with the magician performing between sets, as well as regular comedy nights.