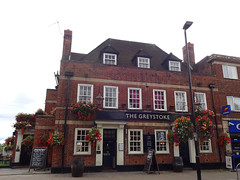 Greene King pub on the border of Ealing and West Acton, in the Good Beer Guide.

It's a single open-plan room inside, though with two very distinct areas. The main entrance leads into a space with high bench seating and a pool table photo, with the bar directly in front. Round the curve of the bar is a carpeted space with vintage travel posters on the wood-panelled walls, comfortably-padded banquettes, and fairly widely-spaced tables. Low room dividers in the centre of this give a little extra privacy. There's also some outdoor seating on an astroturf area to the side of the pub.

Kake visited on a Tuesday afternoon in September 2017. There were a handful of people in when I arrived around 3:30pm, but more arrived while I was there, most sitting either in the front section or outside. Music was playing quietly, and the flatscreens were showing cricket with the sound off. Service was friendly, and they offered me a CAMRA discount without me having to ask.

They have five handpumps, which in September 2017 were clipped for Twickenham Autumn Red (£1.80/half after 10% CAMRA discount), Portobello Market Porter, Portobello Westway Pale Ale, Twickenham Mandarin Sky, and Abbot Ale. The Autumn Red was in good condition. On bob's June 2019 visit they had four ales and one cider: Boltmaker, Wimbledon Copper Leaf (£3.95), Abbot Ale, Greene King IPA and Lilley's Tropical Cider. The Copper Leaf was drinkable.

In June 2019, bob's scampi and chips (£9) photo was fine. You are given a choice of mushy or garden peas. Service was good.

Kake's verdict: A much more interesting ale selection than I'd expected from a Greene King pub. I'd come back if I was in the area.

Accessibility: A step to get in. No further steps once you're in.