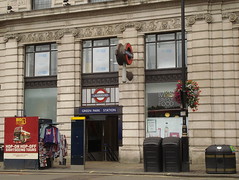 Zone 1 Tube station on the Piccadilly, Victoria, and Jubilee lines.

Changing between lines here can involve a long walk. The londonconnections blog has a useful diagram here.

GPS data collected by Kake on a Garmin eTrex, 12 April 2007, and released into the public domain: OSGB 528991, 180280, on the pavement outside the entrances on the south side of Piccadilly.