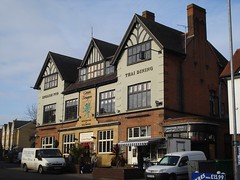 Now closed; was a pub in Winchmore Hill with a Thai restaurant upstairs. According to the April/May 2015 edition of London Drinker, it closed in early February 2015 and the interior has been stripped out.

In 2022 the building contained a branch of Waitrose.

Pub in Winchmore Hill, with a Thai restaurant upstairs. According to Wikipedia, it's "probably the oldest pub in the district", though the current building is not the original one, and prior to the current incarnation it was a Jim Thompson's restaurant. It's now part of a chain (a subgroup of the Orchid Group) which includes the Cock and Dragon in Cockfosters and the Norbiton and Dragon in Kingston.

The interior is one large space wrapped around the long bar, with several clumps of sofas as well as upright chairs and tables. There's at least one flatscreen.

Kake, James, and Alison visited on a Saturday early evening in December 2008. Ales available were Bombardier (£5-something for a pint and two halves) and Greene King IPA. Although the place wasn't packed, there were a fair few people in, including a number of families with small (and well-behaved) children. The flatscreen to the right of the bar was showing sport with the sound on, though from the place we were sitting at the far end this was masked by music.

We decided to eat in the restaurant, and so wandered up there a little after 6pm. Although it was practically empty, with just one party of about ten people, it took a little while before the staff could be persuaded to seat us. They eventually put us in the far corner, under a noisy vent; and there was no music up here to mask this.

We went for the King's Feast set menu (£26.45/head). Of the starters, the tempura prawns and the tod man pla (fish cakes) were both pretty good, though the peanut dip that came with the satay chicken was disappointingly devoid of flavour. The mains might also have been good, but unfortunately they all arrived lukewarm, and although our plates had been heated they were cold too by the time the food arrived. When we raised this issue with the staff, they happily gave us a discount on the bill, but their excuse that "the kitchen is in the basement" seemed a rather feeble one.

Kake's verdict: Probably wouldn't come back, either for beer or for food.

Accessibility: There's a ramp up to one of the entrances, but the door was locked on our visit - best to phone ahead and make sure they unlock it for you. Toilets on the same level once you're in, and there's a dedicated accessible toilet. The restaurant is up a flight of stairs and we didn't see a lift.