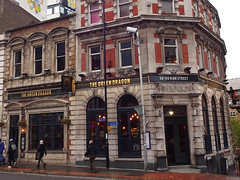 It's quite large, situated on a corner in a converted bank branch, and has three distinct areas on the ground floor as well as a separate "Dragon's Den" on the first floor (used for events such as open mic, live music, and their pub quiz, but available as a function room when not otherwise in use).

Entry is through the corner door into a space made light by large windows on two sides. Long tables here seat 4-6 people apiece on a combination of chairs and long benches. The wood panels on the walls are a little too obviously intentionally distressed, and those currently-fashionable "bare bulb" style lights hang from the ceiling amidst similarly-fashionable exposed ducting. A large arch leads through to the bar area, where the seating is primarily at high tables. Separated off by a room divider is a dais with a pool table, flatscreen, and half-round armchairs.

We've visited several times now, most recently in November 2017. bob first visited on a Thursday afternoon in October 2008, while there was a beer festival on (festival prices: £2/pint). The beer was pretty good. I got there around 5:30pm and it was full-ish.

When Kake and Ewan visited on a Tuesday late afternoon in August 2011, there were quite a few people in at 5pm, some eating an early dinner. Rock and blues were playing, and the flatscreens were showing sport with the sound off. On a return visit in September 2011, one of the handpumps was dispensing cider, while the others were a range of small and independent breweries (including Dark Star Hophead, Jenning's Sneck Lifter, and beers from Box Steam Brewery, amongst others).

On a January 2013 Sunday afternoon visit, two of the handpulls were offering beers by Croydon breweries (Cronx, and Clarence & Fredericks). They also had the usual keg lagers, as well as Brothers cider (with a range of syrups to add, including lemon, raspberry, and toffee apple). The pub was well-attended, but still a pleasant environment to stand in and drink, and a table opened up fairly quickly. Upstairs the function room was being used for live jazz.

When Kake visited on a Tuesday afternoon in November 2017, there were a handful of other customers in around 2:30pm. Music was playing, not too loud. Service was friendly and helpful (though they did get my food order wrong, possibly because they were still getting used to their new till system). All eight handpumps were clipped (for Titanic Chocolate & Vanilla Stout, Southwark Potters' Fields Porter, By The Horns Diamond Geezer, Hogs Back Rip Snorter, Hogs Back T-E-A, Wantsum Old Dragon, Tiny Rebel Juicy, and Mad Squirrel Sumo), and they also had six real ciders on gravity as well as a row of keg taps for craft beer.

Food is served, possibly all day. Kake and Ewan first tried the food in September 2011; most of it was priced around £6-£9, but they also had a two for £8 offer, which we used to get scampi & chips and sausage & mash. The latter came with three long sausages and decent quality mash with some gravy.

A refurbishment in late 2017 saw the launch of a new menu photo 1, photo 2, including a separate list of gluten-free items photo.

In November 2017, Kake tried the BBQ beef burnt ends focaccia with chips photo. The pricing was a bit confusing; they charged me £5.75 for the sandwich, some chips, and a pint of lime & soda, whereas according to the menu that should have been the price for the sandwich alone. It may have been some sort of lunchtime deal; the sandwich itself was pretty small and I'd have felt quite ripped off to be charged £5.75 just for that. It was pretty good though; the beef was tender with a pronounced beefy flavour, and the condiments, bread, and salad were in good proportion. Overall it was just a touch saltier than ideal, but this is a minor criticism. The chips were less good; although they did clearly taste of potato, they were undercooked.

bob visited on a Sunday lunchtime in December 2019. There were eight handpumps on, including Prospect Nutty Slack (£4.25 pint, and good) and Franklin's Eclipse (£4.15), as well as a range of ciders and keg beers. Scampi and chips (£8.50) photo was good; a decent-sized portion and deep fried very well. I also had their one vegan dessert, red fruit monkey bread (£3.75) photo, which was fine.

According to the Green Dragon website as of November 2017, quiz night is Monday.

Accessibility: Steps at one entrance, ramp at the other. There's a step in the middle of the pub, but ramps to one side to circumvent this. There's an accessible toilet too. Other toilets are in the basement. The pool table is up two steps.