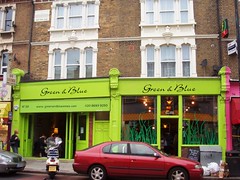 Green & Blue was a wine bar and off licence in Lordship Lane, East Dulwich. It closed at the end of 2012.

As of mid-2013 the premises are occupied by a restaurant and wine shop called Toasted.

The information below is retained for those who want to know what Green & Blue was like.

A wine bar and off licence in Lordship Lane, East Dulwich. (There used to be a Clapham branch but this closed in January 2009.)

Originally this was just a wine shop, but they have extended into the property next door and opened a wine bar, where any of the shop's wines can be ordered at a very reasonable mark-up. The food menu includes tapas, platters, and panini.

The off licence part sells interesting bottled beers which can be drunk in the wine bar (though according to an anonymous commenter in June 2009, they only have about five beers). It also sells a good range of wine, all of which is listed on the website. They have a special section dedicated to 'Different' wines, which is recommended if you really do want to try an odd-tasting wine.

secretlondon visited in September 2008 for tea and cake. All the other customers were women with small babies. I had a chocolate brownie with ice cream (£4.50) photo and a camomile tea (£1.20) photo. They charge for filtered tap water (£1 for 750ml) and all coffees can come with soya milk.