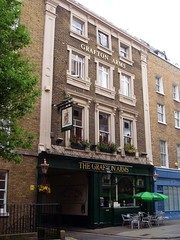 Note: As of 2017, the Grafton Arms has had something of a makeover. Some or all of the details below may be out of date.

As well as the ground-floor seating, there's another seating area (which doubles as a function room) on the first floor, and there's also a rather nice little covered roof terrace where smoking is permitted. Access to the terrace is via the function room, so may not always be available.

There were four real ales available on Kake's June 2010 visit, all Greene King brands — St Edmund, Old Speckled Hen, Hardy's & Hansons Olde Trip, and Greene King IPA. A round of two IPA and one St Edmund came to £9.10. The place was fairly empty (though not deserted) when we arrived around 2:30pm, but by the time we left several hours later, the roof terrace was full (it was a Tuesday, and the weather was fairly good).

Accessibility: The ladies' toilet is up a flight of stairs on the first floor (not sure about the men's). Not sure about steps to get in.