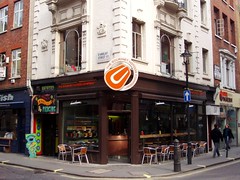 Opened in February 2008, this was intended to be the first branch of a chain which unsurprisingly specialised in hotdogs. As of early 2009, it had ceased trading (though as of mid-2011 the company still exists and has an outlet in Canary Wharf).

Following this closure, the Berwick Street premises were empty for a long period, until a kebab shop called Wrap N Roll opened there in late 2010.

It's located in the heart of Soho, alongside all the other lunchtime quick-eating high concepts. Some googling on the interwebs suggests it's a venture from the same people who brought us The Real Greek and Livebait chains.

The website has their menu, which has some interesting ideas like the Full English hotdog and the Northener. Ewan, obviously, went for the vegetarian (Italian mushroom) sausage, which was very tasty with some nice salsa, though not overly filling. They offer an option of breads (white, wholemeal, onion), or no bread (the sausage can be added to a salad). You can also create your own combination of sausage and toppings, if you prefer.

Prices are a bit steep (£4.50 for the vegetarian, but there are cheaper options), but perhaps not so much for the area.