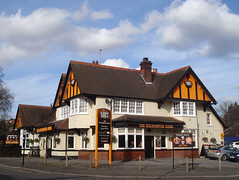 The Goldsmiths Arms was a pub in East Acton. According to the Oct/Nov 2017 London Drinker, it has now closed.

It's quite large inside, with plenty of space for both standing and sitting. Some of the seating is on an open dais, with a (fake) open fire at one and and windows running along the length to let the light in, but there's plenty more seating tucked away around corners for a bit more privacy. There's a garden too, including a covered smoking shelter (though this has no seating).

Kake first visited early on a Thursday evening in February 2009. Although the bar has three handpumps, only one was on, offering London Pride at £2.82/pint. The Pride was served quite warm and came out of the pump quite frothy, but didn't appear to actually be off. On another visit on a Friday afternoon in February 2015, again there was only one handpump on, clipped for London Pride; a pint of lime and soda was 80p.

Music was playing on both these visits, but not annoyingly loudly, and both times there were a fair few people in.

As of February 2015, food is served all day from a chain-wide menu with reasonably low prices. In February 2009, Kake had the mixed starter combo for one (£4). This turned out to be identical to the one I had a couple of months previously at the Southern Cross in Watford — exactly the same components, and obviously from the same supplier — though a little less competently cooked; the potato wedges were a little undercooked, the garlic bread was slightly burnt, and the chicken wings were rather overcooked. Certainly a decent quantity of food for the price, though.

A sign seen in February 2009 advertised a cash prize quiz every Monday at 8pm.

Kake's verdict: I wouldn't come here on purpose, but I'd pop in if I was passing and needed a sit-down. The main reason I've been here twice is that it's pretty much the only pub in the immediate area.

Child-friendliness: The (RADAR-locked) accessible toilet has a sign on it indicating that there are baby change facilities within. They have several highchairs, the type with no tray and very little back support. There's a separate children's menu.

Accessibility: Level access to get in, to get to the bar, and to some of the seating. A couple of steps and two heavy doors to the ladies, but there's a RADAR-locked accessible toilet on the level.