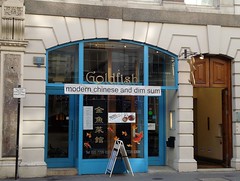 Was a Chinese restaurant in the City, now closed. As of mid-2012, the premises are occupied by a private members' club called Peony Club.

"Modern Chinese" restaurant in the City, the second branch of the original Goldfish in Hampstead.

The restaurant is set over three levels, with the ground floor seating around 30 or so. In the basement there's more seating plus a bar with bar stools, and there's a private room on the first floor.

Kake and two friends visited on a Tuesday lunchtime in August 2010. They only seemed to have the ground floor seating area open, the place was fairly full, and we hadn't booked, so there was a short wait while they cleared and reset a table for us.

Our intention was to have a dim sum lunch, though we did briefly ponder changing our plans when we saw how short the dim sum menu was photo — a short dim sum menu is usually not a good sign, as it often means that the dim sum are bought in pre-prepared rather than being made on the premises (note: we don't know for sure whether this is the case at Goldfish City). However, in the end we decided to go ahead with the original plan.

In general, the quality of the dim sum was fairly poor. Reasonable enough fillings were badly let down by overly-thick wrappers photo and sloppy presentation photo. Scallop dumplings photo had prettily-shaped wrappers which had sadly dried out and become tough; also, they weren't really scallop dumplings, but actually prawn dumplings with a (small, but nice enough) piece of scallop on top. Char siu buns were chewy rather than fluffy, the bread tasted over-fermented, and the pork inside was nothing special. Perhaps the best dish we tried was the sticky chicken rice in lotus leaf — it wasn't really above average in comparison to other dim sum places, but at least it was competent.

Thankfully, our meal wasn't overpriced, with everything we tried costing between £2.30 and £2.80, which is a very reasonable price for dim sum in London. Oolong tea was £1.25/person, and was fine (the other tea options were jasmine and pui li, the latter possibly being an alternative pronunciation of pu-erh?). Other drinks were pricier; citron crush (£4) was about half crushed ice, and one glass was not enough to satisfy, though it was deemed very tasty with its mix of lemon/lime juice and fresh mint.

Background music was playing throughout our visit, but quietly enough that we didn't really notice it. Service was friendly enough, though our drinks took rather a long time to arrive. A 12.5% service charge was auto-added to our bill.

Kake's verdict: I definitely wouldn't come back here for dim sum. However, bad dim sum doesn't necessarily imply bad main menu, and other reviews are quite complimentary about the evening food, so I might give it another chance some time.

On Kerry's Monday lunchtime visit in August 2011, two of the dim sum dishes arrived less than two minutes after I ordered, which didn't inspire me with confidence about the preparation. My experience was broadly similar to Kake's party last year, although prices have risen (to be fair, in line with inflation) to around £3-£3.20 per dish.

Accessibility: A ridge and a ramp to get in. Most of the ground floor seating is up three more steps. Toilets are in the basement, down a spiral staircase with a sturdy but non-continuous handrail.