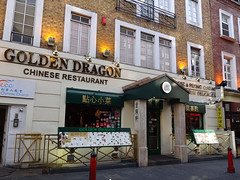 Chinese restaurant near the west end of Gerrard Street in Chinatown. Its Chinese name is 金龍軒.