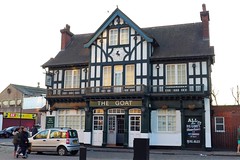 No real ale; the closest thing is Greene King IPA Smooth (£1/half pint), which is nitrokeg.

Kake visited on a Monday afternoon, when it was pretty much empty. There was some kind of rock playing, but not annoyingly loudly. One flatscreen TV was showing kids' cartoons (with the sound up) and a couple of other TVs showing something completely different (they did sync up later on).

The layout is divided between a cosy sort of nook-ish layout at the front, including padded leather seats and even a couple of small armchairs (not the comfy kind though, the kind that are just fairly hard chairs with arms and curved backs). The back part is bigger and has at least one pool table.