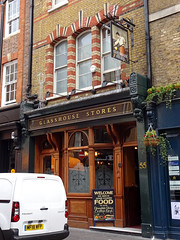 As with all Sam Smith's pubs, it only serves their own beers. There are no handpulls for the ale, though they still serve their Old Brewery bitter (£1.90/pint in November 2009) as well as the rest of their standard range. Sam Smith's cider was £2.70/pint as of July 2007.

Seating is fairly extensive for the locale, with booths on the wall alongside the bar (which is by the front door), as well as tables around the back of the room and in a side room, as well as down a few steps towards a rear fire exit. There is plenty of additional seating in the downstairs cellar bar which opens at peak times (lunchtimes and evenings), where several very large tables as well as a small bar can be found.

There is a bar billards table in the back room upstairs, though it's not clear if it's working (it was out of order as of July 2007).

Accessibility: Toilets are down some narrow stairs, near the cellar bar.