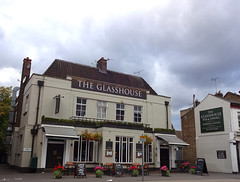 Pub in New Malden, just across the road from New Malden Station.

Previously known as the Railway, it was refurbished in mid-2008 and now offers real ale and French (and British) food. It's divided into a couple of sections; a bar area at the front, and a dining area and a garden at the back. The bar area has a mixture of seating; small, low armchairs clustered around coffee tables, a few high tables/chairs, and some normal tables and upright chairs too.

Kake and friends have visited a few times now, most recently in October 2013. Service has generally been friendly and efficient, with tasters of the ales offered and empty glasses cleared very promptly.

At least four different real ales have been available on all our visits: Doom Bar (~£3.50/pint), Deuchars IPA, Young's Bitter, and Bombardier in August 2009; Theakston's Best, Caledonian Over The Bar (£3.70/pint), Bombardier, and Courage Directors in February 2011; and Butcombe Bitter, Caledonian Golden IPA, Theakston's Old Peculier, and Thwaites Wainwright in October 2013. A pint of lime and soda was £1.60 in October 2013.

On all our visits the lighting in the bar area has been very dim after 6pm, to the point where it would have been hard to read a book (it's more brightly lit earlier on, but they turn the lights down as it gets towards evening), and music has been playing (not very loudly on our first two visits, but fairly loud on our Halloween 2013 visit). On our August 2009 visit, although it was after 9pm, there were several children shouting and scampering about, probably part of a family party in the back dining area, so it seems the place is family-friendly.

We thought the seating arrangements were a little suboptimal, though by the time of our second visit they'd added an extra normal table, which helped. The small armchairs were not entirely comfortable for the taller members of our party, and we also felt the way they were arranged around the tables wasn't really conducive to conversation unless we sat up and leaned forward, which rather negates the point of an armchair. One of the normal tables was booked on our second visit.

According to promotional material as of October 2013, there's a quiz on Sundays at 7:30pm, live jazz from 8pm every Saturday, and live piano every Tuesday from 8pm to 11pm.

The food part of the operation appears to be a L'Auberge operation (either now or previously part of the Massive Pubs group) rather than the work of a completely independent chef.

Accessibility: Ramp to get in. Level access to seating area, bar, ladies' and gents' toilets, and accessible toilet. May also be step-free to the garden. The pub has its own car park. DisabledGo entry