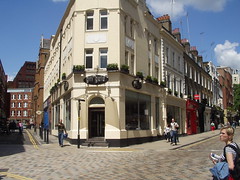 Gili Gulu was an all you can eat conveyor belt sushi place on Monmouth Street. It closed for good in December 2007. As of early 2009, the building is occupied by Rossopomodoro, WC2H 9EP.

Note: this place is no longer open. The information below is retained for people who want to know what it was like.

Kake only went here once, but thought it was pretty bad; the rice in the sushi was appalling and the toppings were hardly better. It may be all you can eat, but if the food is so awful that you don't actually want to eat very much of it, the £14 cost looks like much less of a bargain.

Other people like it, though, and the AYCE thing does make it easier to figure out how much you're spending. Plus, it may have got better since my visit, which was a few years ago. It can hardly have got worse.

It's also worth pointing out that they add a hidden 5% service charge when you pay for your meal. Which you can argue with and have removed.

Comment added by dwilson: A group of us went on 2007/06/13 and the food was decent if nothing special but it was made a lot better by the quantity. The teriyaki was good.

Comment added by Evil Dave: Doesn't even approach being great sushi, but for a mere fourteen quid I was *most* satisfied.