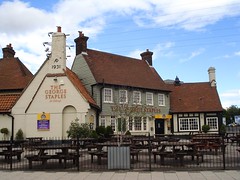 Pub in the Blackfen area of Sidcup.

It's large inside, and made to look larger by a wall of mirrors along one side. Colours are browns and creams, and the space is broken up by pillars and wooden screens. Several flatscreens are dotted around.

There's a large quantity of outside seating at the front, though this is quite utilitarian, with no plants in evidence, and it's right on the corner of a busy junction. It's not under cover, which perhaps explains the presence of an additional "smoking patio" out the back — actually just a standing area under a large rectangular umbrella.

Music was playing on both visits, fairly bland and not too loud. There were a fair few people in both times too. On our September 2013 visit, half of the flatscreens (and a large pull-down projection screen in the darker area of the pub) were showing some kind of news report (possibly sport-related) while the other half were alternating between adverts for the pub chain and videos to go with the music.

According to their website as of September 2016, food is served noon to 10pm every day. The menu is chain-wide and fairly unexciting photo as of September 2013. In September 2013, Kake's vegetarian falafel and spinach burger with cheese (£5.65) photo was fine, with a nice texture from the roughly crushed chickpeas in the burger. The lettuce, tomato, and onions sandwiched in with the burger were good and fresh. The accompanying twisty fries (75p extra to have these instead of chips) were fine too.

According to a sign seen in September 2016, there's a quiz every Thursday evening. They have free WiFi via a system called MySmartWifi, which requires registration but doesn't check whether you've used your real email address.

Accessibility: One largeish step to get in. Once you're in, it's step-free to the bar and seating, but there's a step inside the ladies' between cubicles and sinks.

Child-friendliness: There's a separate children's menu photo. They have at least four highchairs, the type without trays. A sign noted in September 2013 stated that children are welcome until 8pm, and the pub's website as of the same month confirms this, noting that it's "a child friendly pub until 8pm". There were a several children in evidence on our Tuesday afternoon visit in September 2016.