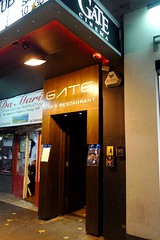 The Gate was a bar, club, and restaurant serving pan-Asian food in Notting Hill, located in a basement below the Gate Picturehouse. It has now closed.

As of October 2018 the entrance is boarded up photo, and although there's a premises licence application for "The Little Yellow Door" taped to the boards photo, this dates from April 2017.

Bar, club, and restaurant serving pan-Asian food in Notting Hill, located in a basement below the Gate Picturehouse.

It appears to have been there for some time; we spotted a licensing application dating from 2006. Judging by some reviews, the food style used to be different, but as of 2011 they offer a menu of pan-Asian options including dim sum.

Kake, Ewan, and Kerry visited on a Wednesday evening in November 2011. We had a Groupon offer voucher which entitled us to a platter of dim sum plus two cocktails, and we ordered a couple of extra dishes and an extra cocktail to round this out.

Har gow photo were sloppily-made and badly overcooked. Scallop dumplings photo were actually mostly prawn; also, the wrappers were a bit thick, but at least not overcooked. Gyoza photo were Japanese-style rather than Chinese-style; they were OK. Siu mai were also OK, but nothing special.

Service was a little scattered; the tap water we asked for never arrived, and after finishing our first round of cocktails the wait for a member of staff to order more was long enough that we eventually decided not to bother. Nevertheless, a 12.5% service charge was automatically added to the bill.

Kake's verdict: Mediocre. I can't imagine wanting to come back.

Accessibility: Access is via a flight of steps with a non-continuous handrail on one side.