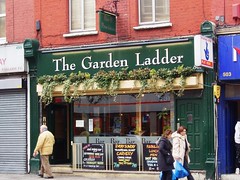 The Garden Ladder was a bar/pub/gastropub on Green Lanes in Harringay. It closed for good in April 2014. As of July 2014, the premises are occupied by a bar/pub called Brou-ha-ha.

Bar/pub/gastropub on Green Lanes in Harringay.

The decor is reasonably smart; much of the seating is provided by pale wood tables and upright chairs, and the floor is stripped boards. There's a semi-open kitchen at the back — if you're sitting in the right place you can watch the chef through a little window. Although the space is quite long and narrow, with quite a lot of room being taken up by the bar, mirrors along one wall make it feel a bit more spacious. There's a nice big sofa near the large front windows, opposite some church pew style seating. There's also some kind of smoking area out the back. On Kake's June 2008 visit there was a selection of newspapers for customers to read, but these were no longer in evidence on a Monday afternoon in September 2009, possibly because the pub now doesn't open until 4pm on weekdays.

They have three handpumps, and Casque Mark accreditation. Courage Directors is the regular beer, and they have one or two guests as well; in June 2008 the guest was Spitfire (£2.85/pint) with Tom Fool marked as "coming soon", and in September 2009 the guests were Jennings Crag Rat and Theakston Best.

Kake first visited on a Tuesday late lunchtime in June 2008. There was one other customer sitting at the bar when I got in, working his way through a bottle of wine and listening to his iPod, and a couple more arrived one by one while I was there. Staff were friendly enough. Background music was pretty much exclusively from the last half of the '80s; Madonna, a-ha, Bananarama, Bros, Yazz. It wasn't too loud, but since I wasn't too keen on this stuff the first time around I didn't stay for a second pint — I would have, otherwise, since the sofa was nice and there was nothing else wrong with the place.

Kake visited again on a Monday afternoon/early evening in September 2009. A large lime and soda (16oz — "we don't do pints of that") was £1.40. There were about ten other people in at 5pm, mostly clustered around the bar and chatting. Background music was playing, as on my last visit, but this time it was heavily focused on the Beatles and other stuff from the '60s.

As of September 2009, the regular food menu is served 4pm-9:30pm Tuesday-Friday, noon-10pm Saturday, and 6pm-9:30pm Sunday. They also have "curry nights" on Mondays, with a choice of beef curry, veggie curry, or curry of the day for £7 including rice and salad. See photo of the menu as of June 2008 — the one Kake saw in September 2009 looked fairly similar, though some of the dishes had changed or disappeared and the prices were very slightly higher.

Kake gave the food a go in June 2008, choosing the salmon with spinach and crushed new potatoes (£8). It was pretty good, and a decent price. I really liked the potatoes, and the salmon was fine, with a nice crust on one side without being overcooked (I'd have preferred it a bit rarer but that's just personal preference — it was fine). Unfortunately the spinach was a little gritty.

Accessibility: Two steps up to get in, and another smaller step to get to the toilets. Some of the seating is at high tables with high chairs, but most is at a normal height.