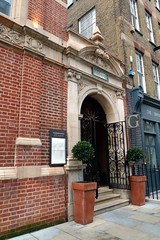 A restaurant in Spitalfields run by the Galvin brothers, who operate a number of other well-regarded restaurants around the capital, including a more relaxed cafe on the other side of this building photo.

The restaurant is located in a Grade-II listed building, St Botolph's Hall photo, preserved amongst all the modern developments around the Old Spitalfields Market. As suggested by the restaurant's name, this used to be a chapel, and indeed the vaulted roof with its aged beams soars high above the dining room floor. Additional seating is at tables hidden away to the sides behind heavy curtains, as well as a few others on a curiously-constructed modern addition above the main dining floor. The front door is opened by a doorman, and a small reception table waits inside.

There is a fixed price menu at lunchtime photo of prix fixe menu and starters as well as à la carte options for starters, mains and desserts photo of mains and desserts menu in Jan 2010. The menu suggests French-influenced cooking and covers a good range of enticing options.

On Ewan's visit with a friend in January 2010, our starters were a fine escabèche of yellow fin tuna, aubergine caviar and coriander (£10.50) photo and a particularly tasty souffle-like concoction labelled a 'lasagne' of Dorset crab with velouté of chanterelles (£11.50) photo, presented as a small stack topped by the chanterelle mushrooms. The mains we tried were a tender and excellently cooked saddle of Denham Estate venison, with braised red cabbage and blackcurrant sauce (£22.50) photo, though even better perhaps was the tagine of Squab pigeon and harissa sauce (£22.50) photo that my friend had, the pigeon presented in the middle of a fussily-decorated plate including a quail's egg.

A dessert of prune and armagnac parfait (£8.50) photo was possibly the highlight of Ewan's meal, the parfait just perfectly creamy with a lovely crunchy caramelised base. The cheeseboard selection, though it came from a lavishly well-stocked trolley photo, was for its price (£10.50) somewhat disappointing in the meagre portions provided of the four selected cheeses photo. However, all were of a good quality, and this was but a minor gripe in an excellent meal.

To finish, the coffees photo were in no way disappointing, and were modestly served with a rich chocolate truffle, attractively presented photo.

Ewan's verdict: Overall, this was a satisfying meal in an impressive restaurant space. Service was not too overbearing and glasses were kept topped up. There was a noticeable lack of any extras despite ordering from the à la carte menu (no amuses bouches, for example), but the quality of the cooking was of a high standard and the prix fixe menu looks to be good value.

Accessibility: Toilets are built on a raised level above the restaurant, up a number of steps. We didn't check whether there was lift access to this level.