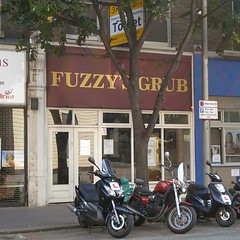 Fuzzy's Grub was a sandwich shop/cafe near London Bridge Station specialising in roast meats to eat in or take away.

It closed in July 2009 and was replaced a year later by an Indian restaurant called The Shard.

The information below is retained for people who want to know what it used to be like as Fuzzy's Grub.

Sandwich shop/cafe near London Bridge Station specialising in roast meats to eat in or take away. It's part of a small chain; this branch is on Tooley Street in Bermondsey, and there are seven other branches across London. This one is aimed at people who work locally, and so is closed in the evenings and at weekends.

They sell hot roast chicken, pork, turkey and lamb served in sandwiches, in salads and with all the trimmings as a Sunday-style roast. They also do a choice of two soups every day, and breakfasts. There are vegetarian options and other sandwich fillings, but this place is really known for its roasts.

secretlondon has been twice now, most recently in May 2009. The first time I had a takeaway roast lamb dinner with all the trimmings. This came with mint sauce, crackling, carrots, stuffing, roast potatoes, peas, and gravy and cost £5 photo. The second time I had a roast chicken salad for £6. I've not eaten in but there are a few tables inside. The food was nice but I've heard complaints from colleagues that it can be cold.

They do deliveries but with a minimum spend of £25 for lunch and £15 for breakfasts, so this is probably aimed at office meetings rather than individuals.