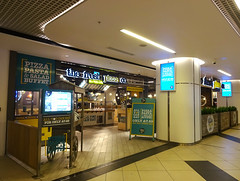 It's mainly notable for its all-you-can-eat breakfast buffet, which as of October 2016 is served 8am-11am and costs £6.49. This includes one hot drink of your choice (an unlimited amount of it), but soft drinks are extra. NB Unlike Pizza Hut, soft drinks don't include free refills: the staff may offer you another drink, but you'll have to pay again for it.

Kake, bob, Billy, Adam, Martin, Nick, and other Circle Line pub crawlers visited for breakfast on a Friday morning in October 2007. The hot buffet ("meat buffet") offered hash browns (replaced at one point by chips), beans, bacon, sausages, fried eggs, fried mushrooms, fried (fresh) tomatoes, and toast. The toast was actually quite good, cut thickly from a decent enough loaf and not soggy at all. Bob thought the fried eggs were overcooked. The cooked buffet was still the same in December 2012, but they stopped refilling it at about 10:15am. The staff offered toast as people came in (a choice of white/brown bread), then brought it to the tables.

There was also a cold buffet ("veg buffet") with fruit and stuff, which our party entirely ignored. I don't know if you're allowed to mix and match, or if you're meant to stick to one or the other.

Despite the sign at the entrance asking people to wait to be seated, we were there at the tail end of serving time, when it was fairly empty, so we ended up just wandering in, grabbing plates and food, and seating ourselves. They did take ages to get around to coming and offering us drinks (some of us had already finished eating).

secretlondon tried the non-breakfast offerings in November 2008; unfortunately the pizza was poor. The buffet did include fruit and salad though.

We've had a number of comments on this page, some of them claiming that this place serves great pizza, others claiming that it serves terrible pizza. We maintain that it might be best to stick to the breakfast buffet.

Wifi: There's a free wifi network; no encryption, so no key required. In December 2012, John was able to join the network (using an iPad) but he couldn't get internet access. A member of staff said that you need to register before you can use it, possibly through a website. There are other unsecured wifi networks within range, including McDonalds (part of O2 Wifi): this asks you to register, but then provides free internet access.

To get here from the concourse, go up the escalator next to Upper Crust, go along a bit, and go up again to the top floor. Strictly speaking, this area is known as Victoria Place (previously Victoria Plaza).

Accessibility: Victoria Place is on two levels, with a lift between them. The restaurant is on the top floor, and there are no steps to get in from Victoria Place itself. Step-free access to Victoria Place is via a lift from the Eccleston Bridge entrance (south side of the station). There is no step-free access from the main concourse of the station except by going out and around to Eccleston Bridge, or by going through the ticket barriers onto platforms 13/14, up in the lift, out again through the ticket barriers by the taxi rank, and in through the doors there.