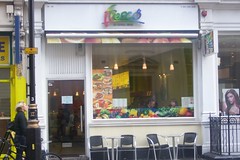 Now closed; was the Oxford Circus branch of a small chain of juice bars which also served Lebanese food. According to Google Street View, by mid-2014 it had been replaced by a shop called D'Wine.

This is the Oxford Circus branch of a small chain of juice bars which also serve Lebanese food, just off Regent Street.

It's really more of a cafe than a restaurant. The extensive range of juices and smoothies are featured on their website — order your juice or smoothie by number from the energetic and smiley staff. A basic large juice is £2.80.

They also serve bagels, falafel wraps (a bargain at £3.00 for a massive wrap with salad and chilli sauce), veggie and meat curries, side dishes of cous cous, stuffed vine leaves, and rice dishes. There's a set lunch of falafel, hummous with salad in pita, and a large carrot juice for £5. Mixed salad box is £4, chicken or lamb salad box is £4.50.

There's a variety of coffees and teas, as well as a range of baklava and other desserts.