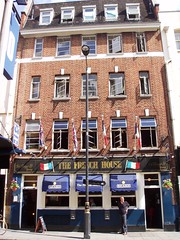 A tiny French-themed pub in Soho, with a small restaurant on the first floor.

The pub downstairs is indeed exceedingly small, with a few little tables in an alcove to the left of the bar, some high tables opposite it, and stools around the walls. It's very much not a place to meet groups of friends. However, the clientele have definite character, and seem to embody a lost side of Soho: it continues to feel like a locals' pub and its walls are decorated with vintage images of French actors, not to mention famous patrons of the past (such as Francis Bacon).

The bar itself has no handpulls for ale, and only a couple of draught lagers (including Kronenbourg). Beer is served only in half pints: it is a point of pride that they do not offer pint glasses. This means that the wine offering is to the fore, and as such it is fairly extensive; the house wine is priced reasonably.

As of April 2010, food was served in the bar as well as the upstairs restaurant, but we're not sure if this is still the case given the restaurant changes noted below.

The restaurant has undergone some changes over the years. Prior to mid-2010 it focused on French food (according to Brockley Central, the ex head chef moved to the Old Nun's Head in Nunhead), but in August 2010 the space was taken over by Polpo as the home of a small Italian restaurant called Polpetto (see Fay Maschler's review). Polpetto too then moved on. According to Grace Dent in The Guardian, as of November 2018 it once more does French food.