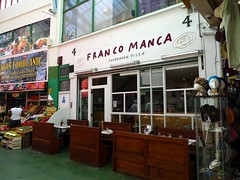 Rather good pizza place in Market Row in Brixton. They also have a deli, Wild Caper, and over twenty other branches including one in the Stratford Westfield and one in Wimbledon.

The bases are thin, made from sourdough proved for 20 hours, and the pizzas are cooked at 500°C for less than two minutes. The result is a soft yet chewy crust, well-risen around the edges and scorched just the right amount on the bottom. There's only a small range of toppings available, in six combinations, and they're applied sparingly, since the star of the show is the crust. Pizzas are available as ordinary pizzas or as calzones (folded-over pizzas). A single pizza is enough for one person unless they're very hungry. According to fatgayvegan, they're happy to put together a vegan pizza.

They're licensed, and serve beer and wine as well as soft drinks.

Note the restricted opening hours; they're only open when the market is open. They're actually spread over two sides of Market Row (which is under cover), with some seating inside plus benches out in the Row.

There can be queues at peak times, but when Kake visited just after 2pm on a Friday in August 2008 there were seats available straight away. Service was friendly despite being amazingly fast and efficient, and they were happy to bring me tap water. My number three pizza (wild mushrooms, garlic, anchovy, no cheese, £4.80) was delivered incredibly quickly, and was very tasty. I'm not actually a fan of pizza crust, or carbohydratey things in general, but I didn't find the crust unpleasant at all. The tomato sauce was good and fresh-tasting, and the anchovies weren't overpowering. I also had some very good home-made still lemonade (£1 for 250ml), served in a swing-cap bottle.

Kake's verdict: I enjoyed this quite a lot and would happily come back. I would urge any fan of real pizza to come here and give it a go; unless you live really far north, it's worth the trip down to Brixton.