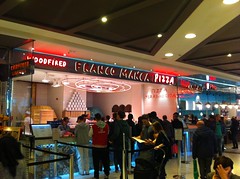 A branch of the sourdough pizza company, located in the World Food Court on the first floor of Westfield Stratford City. They now have several branches around London, having spread out from their original location in Brixton.

As with most of the outlets in this section of the food court, you queue up at the counter to place your order, wait to collect your food on a tray, then find your own seating on the benches nearby. On Kat's Tuesday evening visit in August 2014 there was a queue of 4 people which moved very quickly — I received my chorizo pizza (£7) within 5 minutes of ordering it, and very tasty it was too. The chorizo topping was big chunks of sausage rather than thin slices, which was a nice surprise. A bottle of Franco Manca 'No Logo' Pale Ale was £3.20 — I doubt whether they actually brewed this themselves (on closer inspection it appears to be Shepherd Neame) but it was drinkable enough.

Kat's verdict: A decent, quick option, where I didn't feel awkward dining on my own.

Accessibility: Toilets are in the main part of the shopping centre, and (like the rest of Westfield) are designed with full accessibility in mind. This part of the food court has no steps apart from in a couple of the raised seating sections.