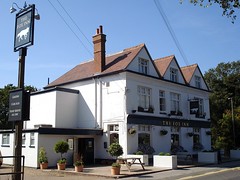 Located in a small village-like area in the London Borough of Bromley, this pub is surrounded by commons and woodlands, and served only by two fairly infrequent bus routes.

Note: According to WhatPub, there was a change of management in early 2021. We haven't visited since, and so some or all of the details below may be out of date.

Entry is into a light, bright bar area with a flatscreen, large pale wood tables, and a sofa/armchair cluster around the fireplace photo. Further back is an air-conditioned restaurant area (pre-set with cutlery on our September 2012 visit, though the staff said it was fine for drinkers to sit there).

It has a few picnic benches out the front, but the main outdoor seating is at the back, on three levels. The top level of the garden is decking, with black basketweave chairs and benches set around smoked-glass tables. Lower down is a paved area with pale basketweave and tubular metal chairs and tables, and even lower there's a grass area with picnic benches.

Kake visited on a Tuesday afternoon in September 2012. Two of the four handpumps were in use, offering London Pride (£1.75/half) and Doom Bar. The Pride was in notably good condition (albeit served in a Grolsch glass).

There were a fair few people in when I got there a little after 3pm; some inside, but about a dozen enjoying the sun in the garden. Music was playing, not too loud, but verging on "hotel bar" style at times. The flatscreen in the bar area was switched off.

Accessibility: A small (kerb-height) step onto the front patio, another similarly-sized step further back to get into the pub. It's step-free to the bar, seating area, restaurant area, and toilets once you're in. There's no step from here to the upper level of the garden (just a small ridge at the threshold), but there are steps to the other garden areas. One of the cubicles in the ladies' is nicely spacious with a door that opens outwards.