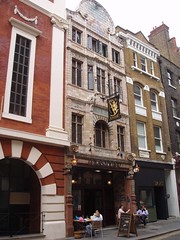 Early-opening pub across the road from Smithfield market. It was acquired by Young's in mid-2014.

Inside, a narrow corridor runs back between the bar and a line of tables squidged in opposite. This opens out further back into a slightly larger space with two or three nice little "snug" areas leading off it photo. There's very little natural light anywhere inside, but there are a couple of tables on the pavement out the front.

Kake and Ewan visited on a Tuesday afternoon in September 2009. We had no trouble finding somewhere to sit, since we arrived early (around 4pm), though we're not sure we'd have had the same luck an hour or two later. Music was playing, but very quietly; again, this might be different later in the evening.

Five real ales were available on handpull: Sharp's Honey and Spice (£1.75/half), Purity Ubu, Adnams Regatta, Nethergate Old Growler, and their own house ale, Fox & Anchor (£3.55/pint), brewed for them by Nethergate. They also had a real lager on handpull, Harviestoun Schiehallion. There are some anonymous taps for draught lagers and a cider (apparently Thatcher's Golden Cider), but none of these are labelled on the bar. Ewan was quite delighted to see that his pint was served in a pewter tankard; Kake's first half also came in an immensely cute pewter vessel.

Accessibility: A shallow step up to get in, followed by a ridge. Toilets are down a flight of stairs. There's not much room next to the bar, so if there was anyone standing there it'd be hard to get a wheelchair past. It'd also be quite hard to fit a wheelchair at any of the tables, and might be impossible to get one into one of the snugs.