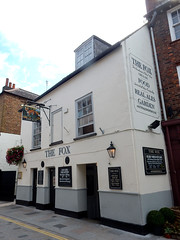 Pub in Twickenham, dating back as far as the 18th century at least photo of sign giving some of its history.

Entry is into the bar area, which is quite small, with a low ceiling, and dimly lit even during the day photo. The exposed ceiling beams and wooden bar front are painted a rather unattractive shade of brown, and old pump badges and beermats are stuck up on the walls around the ceiling. Sprigs of mint sit in bottles of water on the tabletops, which themselves are a mix of wood and beaten metal. Much of the seating here is church pew style. To the side is a lighter, brighter, conservatory-like area which leads out to a part-covered patio beer garden.

Kake first visited on a Thursday afternoon in May 2011. There were a few other customers in, though they were mostly sitting out in the beer garden. Music was playing (Amy Winehouse, Tom Petty, Supergrass, Fleet Foxes, The Redwalls). Real ales available were Nethergate IPA, Harvey's Sussex Best (£1.55/half), London Pride, Firefly Bitter, and Twickenham Naked Ladies. I didn't realise until I was just about to leave that they also had real cider on draught — Thatcher's Heritage, Orchard Pig, and Heck's Farmhouse — as well as Westons Organic and Addlestones Cloudy in bottles.

Kake visited again on a Monday afternoon in September 2017. I was the only customer when I arrived around 3:15pm. Music was playing, a pretty interesting selection, and not quite too loud. Four of the six handpumps were on, offering ELB Foundation, Twickenham Redhead (£2.20/half), Mad squirrel Hopfest, and Deuchars IPA. Each pump clip had an extra label giving the distance from the pub to the relevant brewery, which was a nice touch.

As of September 2017 the food menu focuses on pizzas, burgers, and bar snacks photo.

According to signs seen in September 2017, there's live music at weekends and a pub quiz every Monday from 8pm

Accessibility: Two steps to get into the area with the bar, with no handrail. There's a step-free entrance round the side, which gives access to some of the seating, but there are steps between this and the bar. Toilets are up a flight of stairs with a sturdy handrail, though signs indicate an accessible one in the garden (not checked).