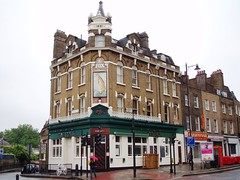 The Fox was a pub on Kingsland Road, at the edge of Dalston. It closed down for redevelopment in June 2018.

Pub on Kingsland Road, at the edge of Dalston.

It spent some time as an Italian-focused gastropub around 2009 (see earlier version of this page) but switched its focus to craft beer following an early-2012 refurbishment.

It's housed in a grand Victorian pub building dating to 1881 (though with a longer history). The main space is filled with mismatched wooden tables and chairs photo, and there's also a cosier side area with banquettes. Stairs lead to a roof terrace, and there's also ground-floor outside seating out the front. The main area also, unusually, houses a vending machine selling bottled craft beers.

Kake visited on a Tuesday early evening in August 2016. There were a handful of other customers when I arrived around 5:15pm. Hip-hop and R&B music was playing, not too loud.

Three real ales were on — Weird Beard Hops Maiden, One Mile End Docker's Delight, and Siren Under Current — as well as two real ciders: Wessex Medium and Sandford Shaky Bridge. A pint of lime and soda was £2, but this somewhat high price was because the soda came out of bottles, and they did warn us of this beforehand. Service was friendly and helpful.

They have free WiFi, with the network name and password printed on the menus.

Accessibility: Two steps to get in, and two more steps to the bar. Step from seating area to toilets. The ladies' has cramped cubicles and (on our visit) a completely dark lobby, making it something of an adventure to work out where to go.