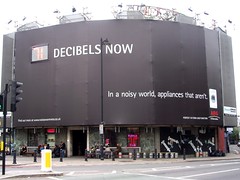 The Foundry was a bar in Shoreditch not far from Old Street Station. It closed for good in June 2010.

A bar in Shoreditch not far from Old Street Station.

To say the aesthetic in here is stripped-down would be an understatement. Bare concrete floors, walls covered in graffiti in every corner (especially downstairs, where they host art events), with occasional colourful artworks tacked up, ancient electronics (old computer screens, fruit machines, dead speakers, etc.) lying around, there isn't a couch or chair which isn't distressed to the point of being broken. We won't even mention the toilets.

And yet, it's not a bad ambience, even quite a likeable place. You can overlook the typical trendy types that gather in this area fairly easily if you're with friends, and the bar serves a good range of Pitfield beers and ales (including their Organic Lager on tap) so there's something to drink. The staff clear up empties very regularly as well.

Music can be quite loud, but they turned it down when a neighbouring table complained about a particularly trebly song which was threatening our enjoyment. Mostly it's easy to talk over.

Certainly, everyone's reaction to this bar is going to be quite different. Clearly some will loathe it as much as others embrace it. For Ewan, the excellent beers swing it.

Note that as of mid-2009, there are reports that the Foundry may be closed down and replaced with a luxury hotel.