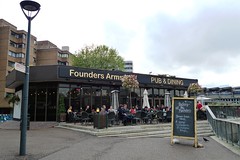 Young's pub on the south bank of the Thames, just to the west of Tate Modern (so you really can't miss it).

It features a large seating area outside with an amazing view of the Thames and the waterside buildings and City skyline (and the menu has a neat little guide to what each building is). It's possible to book tables, but only inside, not outside. If you want a table outside on a nice summer's afternoon/evening (and if you don't want one there's something wrong with you) then get there before 4pm.

When Kake and friends visited in October 2010, the handpumps offered Young's Bitter, Young's Special, and Bombardier; and bottled ales in the fridge included Ramrod, Waggle Dance, Banana Bread, and Double Chocolate Stout. They were also advertising mulled wine for £3.95. Service was friendly enough even though the place was pretty busy.

As of October 2010, food is served from opening until 10pm (brunch before noon, normal menu after). Kake's smoked salmon, cream cheese, and watercress wrap (around £6) wasn't bad, including a reasonable quantity of smoked salmon and with a decent enough red cabbage coleslaw on the side. It was a bit expensive for what it was, though that's only to be expected in such a touristy area.