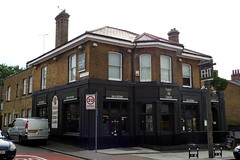 The Forest Hill Tavern was a pub on Forest Hill Road in East Dulwich, just south of Peckham Rye Park. It has now closed. According to the Apr/May 2016 London Drinker magazine, as of early 2016 the premises are occupied by a Laine Pub Co pub called Watson's General Telegraph.

Note: The Forest Hill Tavern underwent a change of management in January 2011, so our comments below may be out of date. An anonymous commenter tells us that real ale is still served (at £3/pint as of April 2011), and food is now served all day until 7pm Mon-Sat and noon-6pm (Sunday roasts) on Sunday.

It's quite smart inside, with polished floorboards, big leather sofas, and lots of dark wood. There's a large beer garden out the back. According to the Southwark News review linked below, they have board games too (though we don't know if this is still the case following the management change).

Kake visited early on a Monday evening in October 2008, prior to the change of management. Although they have at least two handpumps, they only had Spitfire on, so I had a pint of Strongbow (£3.20) instead.

I also had a ham and cheese baguette (£4.25, though advertised as £3.50 on the menu as the prices had gone up recently), and took the option of having it toasted. It was good, made with decent quality ingredients. It came with mustard, mayo, a side salad, and long, thin, crispy, presalted (but not too much) fries.

Service was very friendly and helpful. There were a few other customers in but I had no competition for the sofa. Piped music was playing but not too loudly.

Slightly alarmingly, a notice in the toilets stated that on Friday and Saturday nights, "random searches are in operation for your safety and ID will be required to gain entry"; there's also a "smart casual" dress code on those nights, with hats, caps, and tracksuits being banned.

Accessibility: A couple of steps up to get in, but it's all level once you're in. An anonymous commenter tells us that access is available for wheelchair users, but we haven't checked this out ourselves.