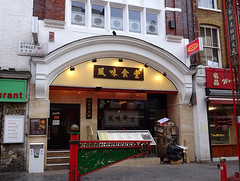 Northern Chinese and Sichuan restaurant on Gerrard Street in Chinatown. They also do Chinese hotpot.

It was previously at 67 Charing Cross Road, but moved here (to the old premises of Harbour City) due to impeding redevelopment of that part of the road. As of early 2016, the only name on the frontage is its Chinese name, 風味食堂, but the English name of "Food House" is given on the wine list.

Kake and bob visited on a Wednesday lunchtime in January 2016. There were a few people in when we arrived around 12:30pm, but plenty of free tables. Music was playing, not too loud, but a rather strange mix of metal and Chinese easy listening.

Preserved eggs with tofu (皮蛋豆腐; £5.30) photo were less attractively-presented than we've had elsewhere; the preserved eggs and tofu were both chopped relatively small and mixed well together, giving the tofu an unappetising grey colour. The tofu was also less silken than we've had previously, and so the texture of the dish was less delicate than ideal.

Vermicelli with spicy minced pork (ants climbing a tree; 蚂蚁上树; £8.60) photo had a good texture, with chewy but not undercooked noodles, though the flavour was a little bland.

Chinese hamburger (肉夹馍; £2.80) photo was a mound of chopped braised pork inside a dense, chewy bun. This was pretty good; the bun had the right amount of chewiness, the meat was well-flavoured, and the proportions of bun and meat were well-balanced.

Rice (£1.80 per portion) was a bit stodgy, possibly due to insufficient washing before cooking. However, a pot of chrysanthemum tea (£4) tasted fresh, and the pot was refilled the moment we finished it.

Service was friendly and welcoming, and the staff member who seated us was careful to make sure we knew that the restaurant had changed from the previous occupant and no longer did dim sum. A 10% service charge was added to the bill photo. Note that as of our visit they were cash-only, as due to the recent move they hadn't got their card machine working again yet.

Kake's verdict: I'd like to come back and try more of the menu, as there are some pretty interesting things on there.

Accessibility: Three steps to get in. The toilets are in the basement, down a flight of stairs with a handrail on one side.