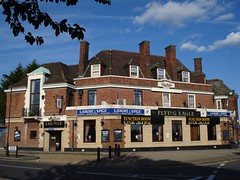 The Flying Eagle was a pub roughly between Queensbury Station and Burnt Oak Station. It has now closed. According to Google Street View, by October 2012 it had been turned into a Tesco Express.

Pub in North London, roughly between Queensbury Station and Burnt Oak Station, a little closer to the former.

No real ale (Strongbow was £2.55), but what they do have is a pretty decent Indian restaurant (run by Lahore Spice) which occupies the back portion of the pub. It's informal; the pub part blends seamlessly into the restaurant part, and indeed if you want drinks other than lassi then you go up to the bar to get them (at least, I did, and nobody told me off for it).

Kake visited on a Tuesday afternoon around 3pm; despite this slightly odd hour, there were a few locals in the pub chatting with the barmaid, and a couple having lunch in the restaurant. The place is reasonably big, but the space is broken up enough that it didn't feel echoingly empty. They have a beer garden out the back with a covered area, and a function room available for hire. There's a flatscreen in the restaurant area, which was showing cricket during my visit, but no background music, hurrah (this may be different when they're not showing sport).

I had the dal gosht (£5) photo with pilao rice (£1.70); the lamb was lovely and tender, the spices were distinct, and I'm sure there were at least two kinds of lentil involved. When I ordered I was asked if I wanted mild or medium; I chose the medium and it was just right. I expect they'd do hot on request. They even brought me paan at the end.

The menu is basically listed by ingredient — karela gosht, bindi gosht, methi chicken, dal chicken, keema chana — rather than using the more familiar curryhouse names. I'm leaning on the side of seeing this as a good sign, but since I only tried one dish I can't speak for whether the spicing and sauces vary between the different dishes. Pretty much all of the main dishes are priced between £4 and £7. They have a good selection of vegetarian options, one or two prawn dishes, and the rest is chicken or lamb. The food is halal, according to a sign above the kitchen.

Not worth a journey across London, given the lack of real ale, but definitely one to keep in mind if you're anywhere near.