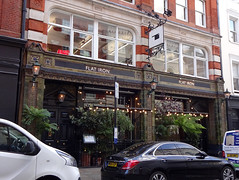 Steak house and 'craft butchery' near Covent Garden piazza. It's part of a small chain, with several other branches around London. They don't take bookings, so be prepared to queue for a table in the evenings.

The simple menu features one item, a £10 steak (cooked to order), which arrives pre-carved on a wooden board, accompanied by a metal beaker full of salad (watercress leaves in vinaigarette dressing). Their Twitter feed suggests there are occasional specials (including burgers) at certain branches. There are a handful of 'sides' as well — chips, an aubergine parmagiana, a blue cheese salad — but nothing that would satisfy a non-carnivore. The wine list is also simple, but with a reasonable price range and available by the glass.

Kat and three colleagues visited on a Friday lunchtime in January 2017. It was busy, but we were led down some dimly lit stairs to a table straight away. Tap water and glasses were already on the table, as was a tub of salted popcorn. Staff were friendly and were happy to double-check with the kitchen about dietary requirements. My steak (which arrived medium-rare, as ordered) was good quality, though despite having an aubergine side and my salad, I could have eaten a portion of chips as well. With a glass of wine each plus service, it came to around £25/head. We were also given a 'free voucher' for an ice cream cone to collect on our way out. This turned out to be a rather tasty chocolate caramel flavour, coated in crushed hazelnuts.

Kat's verdict: it's good value and just about the right level of trendiness for me, but the portion size might leave some visitors feeling a little hungry. I'd return for lunch but I wouldn't queue up in the cold for it.